Saving the best ‘til last: the Lotus Elise and Exige Final Edition cars

(Hethel, UK – 8 February 2021) – This year marks the end of an era for Lotus Cars. As the business moves towards an exciting future as outlined in recent announcements, time is being called on production of the iconic Elise and the genre-creating Exige, after 25 and 21 years respectively.

In honour of these two legendary models, Lotus has announced a range of five new Final Edition cars which have higher power, greater standard specification and – in true Lotus style – light weight.

These cars are the ultimate versions of the Elise and Exige, and mark the pinnacle of technical development to showcase more than two decades of engineering excellence. To be built in limited numbers, each is a fitting tribute to performance cars that are, almost uniquely, legends in their own lifetime.

The improvements continue under the skin, a fact reflected in new names which reveal higher power outputs on three of the five – the Elise Sport 240, Elise Cup 250, Exige Sport 390, Exige Sport 420 and Exige Cup 430.

The Elise and Exige Final Edition cars are on sale now, with the MSRP for selected markets listed below. For other markets please contact the appropriate official Lotus Cars importer.

As revealed last month, the Lotus Evora has also entered its final year of production. Further announcements about plans to celebrate this model will be announced in due course.

The Elise is a truly iconic Lotus, with 2021 serving as the 25th and final year of production. These two new Final Edition cars are a fitting tribute, and the exclusivity and rarity will no doubt ensure high demand and guarantee future classic status. They retain all the core values and features that have made the Elise such an iconic car – a small, light and agile two-seater powered by a supercharged and chargecooled 1.8-litre, four-cylinder mid-mounted engine.

As standard, both Final Edition cars receive the most extensive list of interior and exterior features ever. The biggest change is the all-new TFT digital dashboard with the choice of two screens, one with a conventional set of dials and the other a race car-style with digital speed read-out and an engine speed bar.

The steering wheel is of a new design and clad in leather and alcantara. It features a flat base to create better leg clearance for taller drivers and to aid ingress and egress. Every car comes with a Final Edition build plaque, plus new seat trim and stitch patterns.

A new selection of colours has been introduced for both the Elise Sport 240 and the Elise Cup 250, harking back to some of the iconic colour schemes from the Elise and Lotus’ past. These include Azure Blue, the colour used in the first production car images for media in 1996; Black, the brand colour of the motorsport division when the company ran the successful Autobytel Lotus Elise Championship race series; and Racing Green, an homage to the colour of the original car unveiled at the 1995 Frankfurt Motor Show.

The Elise Sport 240 Final Edition gains an extra 23bhp from a revised calibration and so replaces the Sport 220. Delivering 240bhp and 244Nm of torque, the engine has been tuned to provide stunning real-world performance and class-leading efficiency. The 0-60mph sprint is completed in 4.1 seconds thanks to a power-to-weight ratio of 260bhp per tonne. CO2 emissions of 177 g/km are extremely low for the performance on offer.

Further weight savings can be achieved with an extensive range of optional carbon fibre panels, including sill covers and engine cover, lithium-ion battery plus a lightweight polycarbonate rear window. With all the lightweight options chosen, the mass of the Elise Sport 240 reduces further from 922kg to 898kg.

Key to the Elise Cup 250’s performance are its aerodynamics and downforce linked to its power and light weight. With aerodynamically optimised components such as the front splitter, rear wing, rear diffuser and side floor extension, this Final Edition car produces 66kg of downforce at 100mph and 155kg of downforce at is maximum speed of 154mph.

Other lightweight carbon fibre options, as on the Elise Sport 240 Final Edition, are available reducing the mass to an unladen weight of just 931kg.

The Exige range is celebrated in its final year of production with three new models – the Exige Sport 390, Exige Sport 420 and Exige Cup 430.

All models are powered by a 3.5-litre supercharged V6 with a baffled sump, mounted in a lightweight and rigid chassis that provides thrilling acceleration and instant response. Pure unassisted steering offers exquisite feedback and vivid communication at all speeds. The Exige benefits from a bespoke version of Lotus’ pioneering bonded aluminium chassis, a unique rear subframe and forged aluminium double wishbone suspension at the rear.

Like the Elise Final Edition range, the Exige is also available in a selection of new colours representing significant cars in its history. These include Metallic White, from the unveiling of the V6 Exige at the Frankfurt Motor Show in 2011, and Metallic Orange, which was used on the first press fleet car in 2000 and the and the Exige GT3 concept from the Geneva Motor Show 2007.

The new Exige Sport 390 replaces the outgoing Exige Sport 350. The power increase of 47bhp comes from a revised calibration linked to the Edelbrock supercharger with chargecooling, to produce 397bhp and 420Nm. Linked to a light weight of 1,138kg, the Exige Sport 390 accelerates to 60mph in just 3.7 seconds before reaching a top speed of 172mph.

The Exige Sport 420 Final Edition gains an extra 10bhp and replaces the outgoing Sport 410. It is the fastest Exige available, topping out at 180mph, with 0-60mph completed in 3.3 seconds. With its light weight of 1,110kg and 420bhp (giving a power to weight of 378bhp per tonne) and 427Nm from the supercharged and chargecooled V6 engine, coupled with a flat torque curve and maximum power available to maximum revs, the Exige is regarded as the most complete driving car of its class.

The Cup 430 remains the range-topping Exige. Already legendary in its short lifetime, it is regarded as being one of the world’s quickest real-world sports car. It is not just suited to its driver’s favourite road, but also at home on a challenging circuit.

Chargecooled for a consistent 430bhp and capable of generating 171kg of downforce, this is the road and track car to rule them all. The radical aero package is not for show; the Exige Cup 430 generates as much downforce at 100mph as the Exige Sport 390 does at 170mph. Weighing just 1,110kg the power-to-weight ratio hits a staggering 387bhp per tonne. With 440Nm of torque from 2,600rpm, 0-60mph is completed in 3.2 seconds on the way to a top speed of 174mph. Downforce is balanced at all speeds, with the car generating 76kg at the front and a further 95kg at the rear, giving a total of 171kg.

Everything about the Exige Cup 430 is focused upon performance whether that’s driving on the road or track.

With a high-flow titanium exhaust system as standard, the Cup 430 sounds like no other supercar at speed. Motorsport-derived variable traction control linked directly to the ECU helps maximise traction on corner exit by managing the giant surge of torque. It’s controlled via a six-position rotary switch located on the steering column. Only active with the ESP stability control switched off, the five pre-set traction levels are displayed on the instrument cluster.

When production of the Lotus Elise, Exige and Evora end later this year, the final combined production total will be in the region of 55,000 cars. Together they account for more than half of Lotus’ total road car production since the first Lotus in 1948. 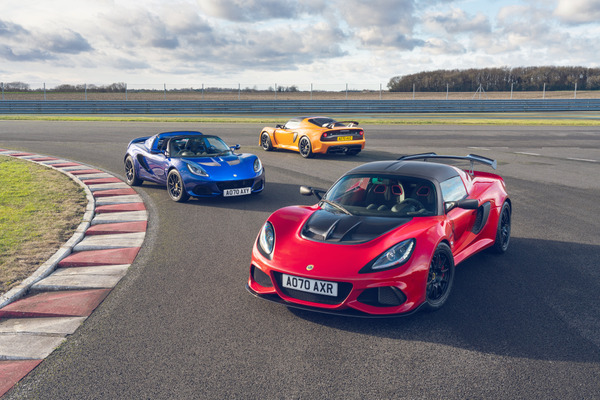 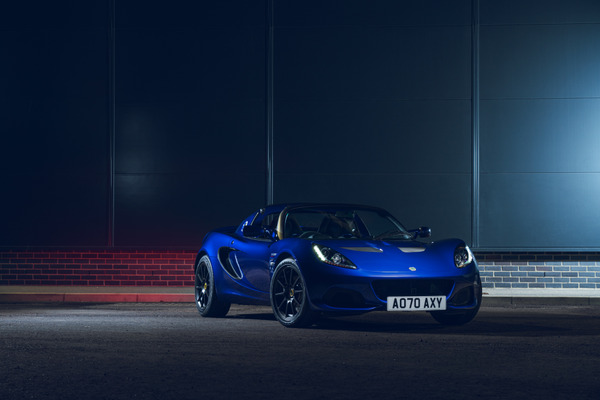 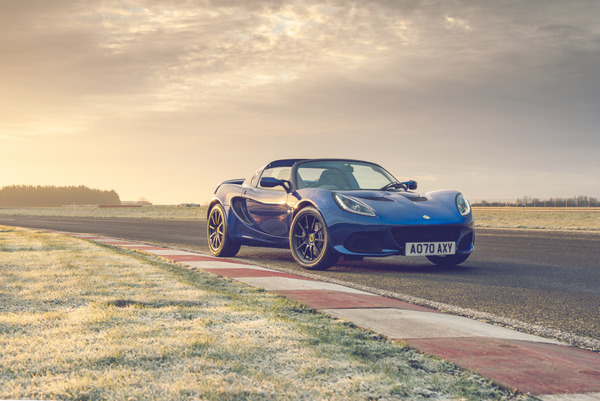 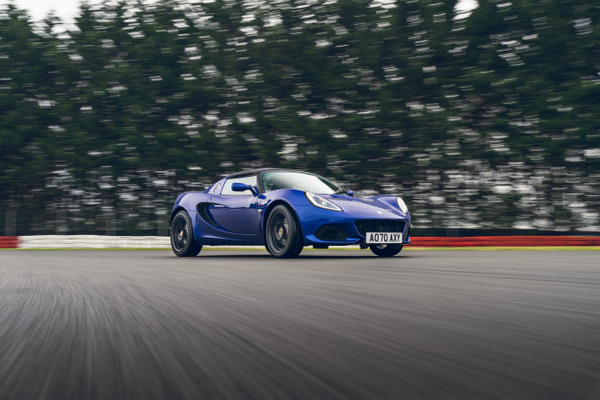 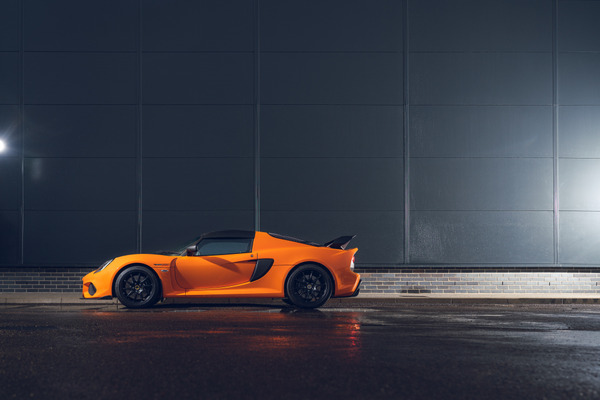 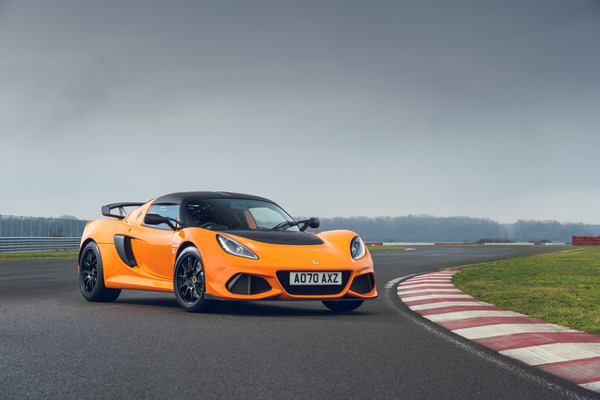 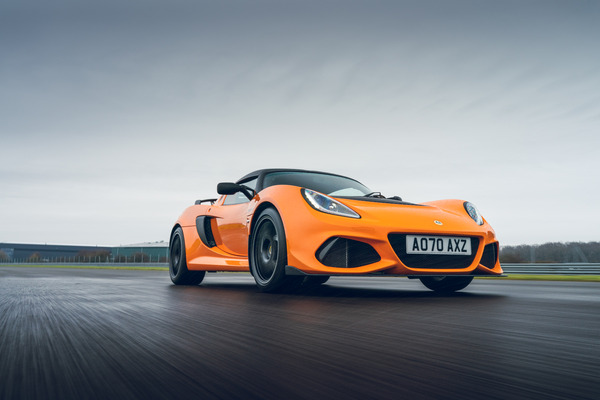 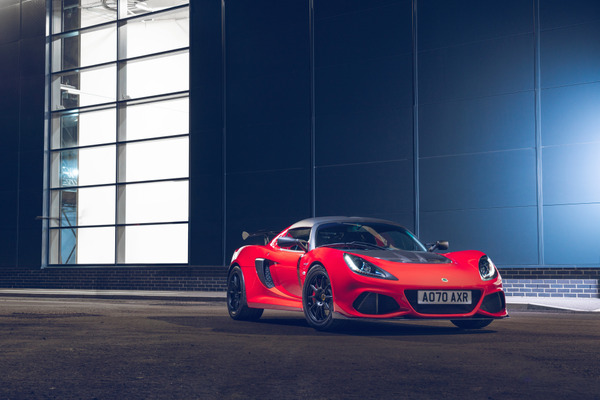 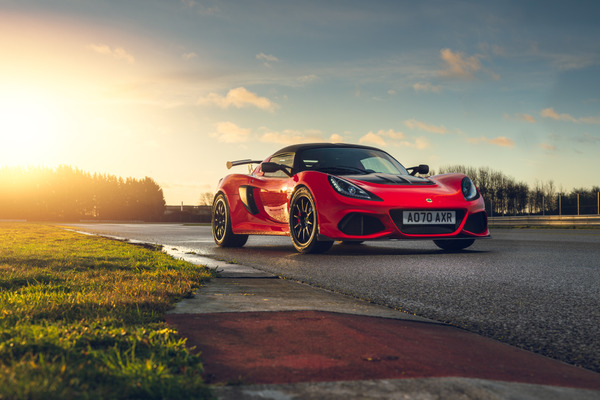