The Mark 6 is recognised as the first volume-built model from Lotus founder Colin Chapman. Everything prior to this had been single cars. Based on his own design of spaceframe chassis, and with him now working full-time at his fledgling business, this is the point at which Lotus became a proper car manufacturer.

Bearing the registration XML 6, the first Mark 6 came with boxy aluminium bodywork and initially had fully enclosed rear wheel arches, though these were soon cut away. In its first competition, at Silverstone circuit on 5 July 1952, it scored two 2nd places. Another version of the Mark 6 with a more powerful engine was driven and reviewed by Autocar magazine and hit a top speed of almost 90mph.

Available as a road and race car, the buyer would usually source their own engine and take it to Chapman for his band of enthusiastic volunteers to modify and fit to the chassis. A completed car would cost around £400, which was excellent value at the time.

Chapman was joined by fellow competitors Peter Gammon and Mike Anthony in racing versions of the Mark 6. They were dominant for two years before production of the car ended in 1955.

In 1957, while Lotus was building the more advanced Lotus Eleven road car and Lotus 12 race car, a spiritual successor to the Mark 6 was launched. Called the Mark 7, it was cheaper in price and aimed at the hobbyist driver. Although not built in large numbers during its 17 years of Lotus production, the design was sold to Caterham Cars and famously continues to be built to this day. 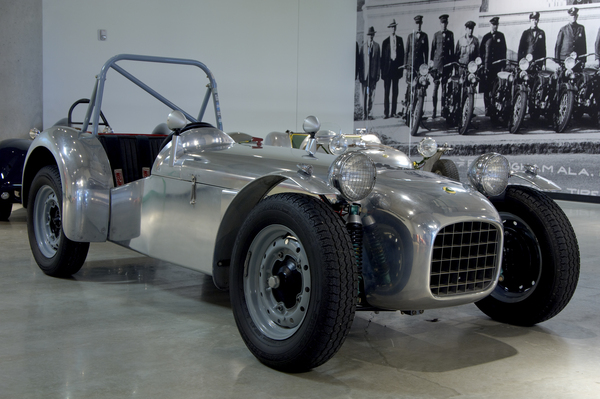