It was 35 years ago today: Senna, Lotus and a rainy day in Portugal 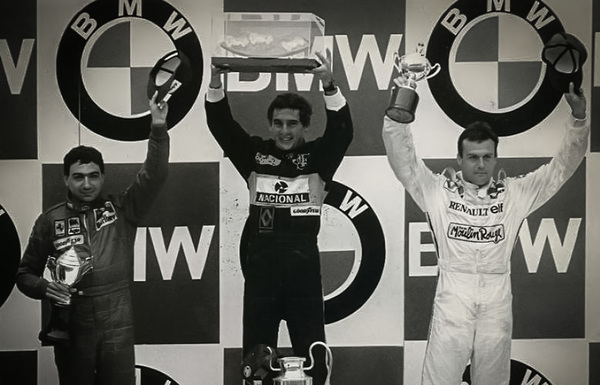 On 21 April 1985, a young Brazilian driver called Ayrton Senna stunned the motor racing world by winning the Portuguese Grand Prix for Lotus in atrocious weather conditions. For more on that story click here.

When Senna arrived in Norfolk in 1981 there was an immediate recognition that this driver was something special. He came to the county to race not for Lotus, but for Van Diemen – a racing team based at the Snetterton circuit, a few miles south of the Lotus home at Hethel – in Formula Ford under his paternal family name of Ayrton da Silva. After a stint in Formula 3 – including a title win in 1983 – he tested for a number of Formula 1 teams and signed for Toleman for the 1984 season.

Following rumours in the F1 pitlane that he was going to be snapped up by a top team, Ayrton joined Team Lotus in 1985. Lotus had wanted to sign Ayrton the year before, such was the recognition of his talent, but JPS as the main sponsor wanted to keep the existing line-up of Elio de Angelis and Nigel Mansell. That year would cost Lotus dear; Senna could command a substantially higher salary after he finished joint 9th in the ’84 championship, not least because he’d scored 13 points, the same as Mansell.

The excellent 2010 documentary film Senna details the character of the man, mainly after his Team Lotus years. He comes across as overly confident and aloof with a ‘win-at-all-costs’ mentality, but ask anyone from Team Lotus who worked with him if this was the Ayrton they knew at Hethel, and the answer would be ‘no’.

As a young F1 driver who had elected to join Lotus over many other top teams, no doubt in part due to the successes of fellow Brazilian Emerson Fittipaldi in the early 1970s, Ayrton was humble, keen to learn, generous and willing to help his colleagues at all hours. For more delightful stories about working with Senna, listen to the US LOT Sessions podcast with Chris Dinnage here.

Other tales from former Team Lotus staff include Ayrton popping over to Wymondham, the nearest town to Hethel, to collect pizzas for the engineers who were working late into the night on his car. Or staying in the workshop long after testing had been completed, and when a rest had been well-earned, taking a genuine interest in everyone’s roles and generally helping out.

Of course, Ayrton was an outstanding driver but his race results only tell half the story. Here’s an example… Lotus pioneered active suspension in F1 and this innovation has enabled Lotus Engineering to lead the world in active systems in the automotive industry, including active noise synthesis/cancellation and active valve train for powertrains.

Through the analysis of the data produced by active suspensions, Lotus was able to monitor driver reaction times. It revealed that when Senna was testing and racing his Lotus 99T in 1987 – the first active suspension F1 car he drove – his response times for steering inputs when losing grip were measurably faster than those of other drivers. Put simply, it meant Ayrton could be at maximum grip and the highest possible speed for longer. This goes some way to explaining how he dominated so often in the wet, and was never demonstrated better than at the Estoril circuit 35 years ago today when he won his first Grand Prix.

You might ask why we are still celebrating the life and achievements of Ayrton Senna at Lotus, 35 years after his first Lotus win and 26 years after his death. It is purely down to appreciation; every racing driver who has driven a Lotus over the years has contributed to the success and reputation of the brand. From Lotus Cup racing to F1, from Stirling Moss and Jim Clark – who was a hero to Senna – to Kimi Räikkönen and beyond, we thank you all.