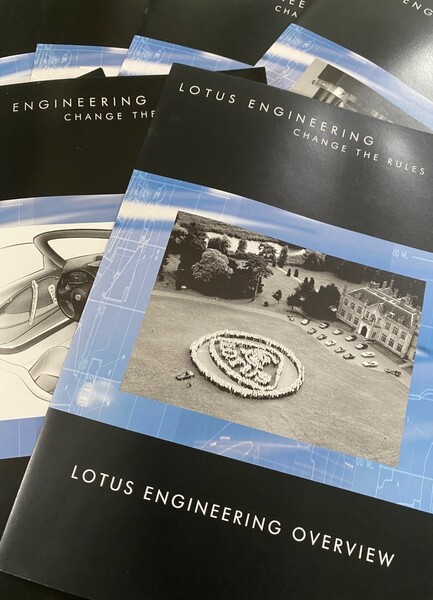 Lotus Engineering, the consultancy side of Group Lotus, was registered as a business with Companies House on 2 July 1980 and so is 40 years old this week.

Of course, the start of Lotus is always acknowledged as being 1948, when Colin Chapman built his first car. It was based on an Austin Seven, and not wanting it to be just another ‘special’ he registered it with a new name – Lotus.

While working on his own vehicles, Chapman also helped design the 1956 Vanwall F1 car – his first consultancy work. As Lotus expanded Chapman’s reputation as a formidable engineer grew too, and soon other companies were asking for his help.

The redevelopment of the Ford Kent engine for the Lotus Type 23 race car prompted Ford to request that this new twin-cam version be fitted to the Ford Cortina. Chapman agreed and the Lotus Cortina, the Lotus Type 28, was born. It was also assembled by Lotus, and so marked the start of third-party manufacturing of both vehicles and components.

By the mid-1970s, Chapman recognised that an additional division of Lotus – whose uniqueness would be to provide world-class engineering services to others in the automotive industry – could be a worthy and lucrative business. This consultancy would lean on the globally powerful Lotus brand and its motorsport successes, and use the critically acclaimed Lotus road cars as an advert for the what Lotus could offer third-party clients.

But it was not until 1980, and 2 July to be precise, that Lotus Engineering Ltd was formally registered. The Lotus Sunbeam, which won the manufacturer class in the World Rally Championship the following year, was the first product of this new consultancy.

Then as now, details on the majority of the projects which Lotus Engineering has worked on remain confidential. The mainstream car-buying public would be stunned to learn just how many of the vehicles on the road today – from supermini runabouts to high-performance GTs and even luxury limousines – have been worked on by Lotus Engineering.