Are you ready to celebrate? 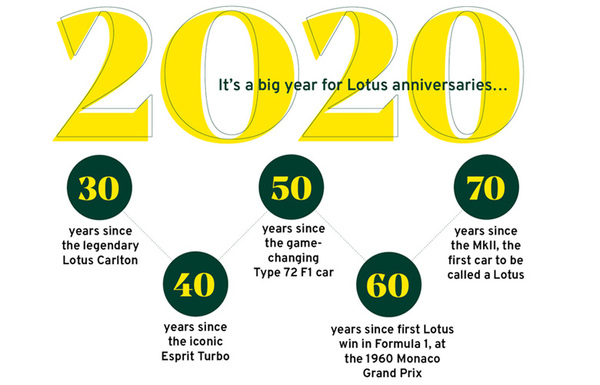 Happy New Year! It’s 2020 and a big year for Lotus anniversaries. Perhaps the most significant if you’re a performance car fan is that it’s 30 years since the launch of the legendary Lotus Carlton – at the time, the world’s fastest four-door saloon. You’ll be hearing more from us about this 174mph icon later in the year.

But that’s not all – check out the infographic above. This year is the 40th since the launch of the legendary Esprit Turbo, and it’s also 50 years since the game-changing Lotus Type 72 Formula 1 car first appeared on the world’s race tracks. Advanced aerodynamics has always been at the heart of the Lotus brand, and the 72 did more to advance this engineering science than anything before it. Cars are the way they are today because of this famous Lotus.

Talking of F1, it’s 60 years since Lotus won its first race – the 1960 Monaco Grand Prix with Stirling Moss behind the wheel of a Type 18. It was the start of something special, with Lotus winning seven F1 constructors’ titles, six drivers’ titles and 81 races… to date.

An obvious question follows, which is whether Lotus will ever return to Formula 1. Never say never, but our focus for 2020 is on the Evora GT4 Race Car Concept – unveiled at Shanghai International Auto Show in April 2019 – and running it in some invitation GT races this year.

Finally, 2020 marks 70 years since the MkII, the first car to be called a Lotus. It was designed by founder Colin Chapman as a pure trials competition car, but in the summer of 1950 it became the first car he ever raced in. He easily beat a Bugatti and was hooked. Chapman sold the car later that year and used the money to build a new and better racer, inevitably called the Lotus MkIII.